Few days before the event, I read a post on Luky’s facebook account saying that his performance at Festival Seperlima on October 26 would be his last one in Jakarta. And I was like “woooott??!” – I really didn’t think that Luky would leave the country. No, I never saw that coming.

Feeling highly obligated to go, I took an ojek from my office to Taman Menteng that Sunday afternoon, despite still recovering from my typhoid fever.

Taman Menteng was a very nice park for this kind of music festival. Unfortunately, there was only a small portion of the park used for the festival, so it became pretty full after the sun set. 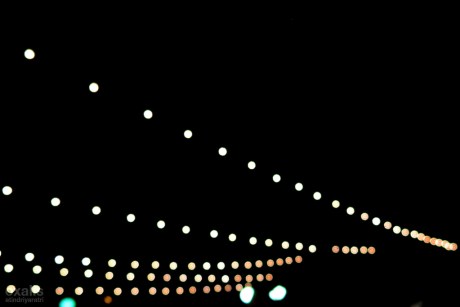 I went there with Titing (whom I hadn’t met for a whole month!) and we sat in the middle front, as I wanted to get a clear view of Luky Annash playing his piano. Luky played at half-past six, opening his performance with “Siksa”. Followed by “Disturbia”, “Bahasa”, and “Kritik Tanpa Solusi”, he finished off with “Bajingan Ibukota”.

Luky was accompanied by his band, with Iga Massardi on guitar (who seemed to always have better lighting on stage than anyone else), Susan Agiwitanto on bass, and Okky Rahman on drums.

I must say the ‘farewell’ performance was much too brief. I was kinda hoping that it would be pretty grand and longer, with Luky wearing some sort of costumes like a butcher or a black angel or something..

But anyway, it was still nice to see his performance again, especially after realising that it had been a year since the last time I saw him live at @America. I wish him the best of luck in Melbourne. 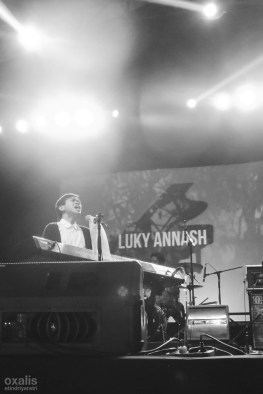 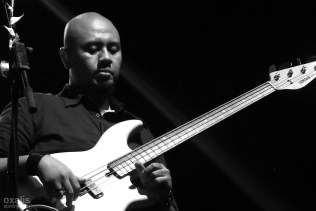 Later that evening I took a photo of Luky with my old Canon pocket camera (with films!) so I would post that one probably in the next couple of months, since I have to look for a place to develop it. 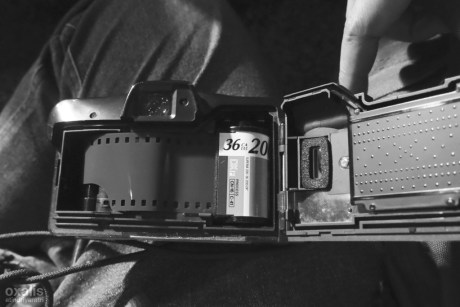 After Luky’s performance, there was a screening of “Masa Sih” directed by Chairun Nisa. The movie was about sex education at a school, and as Titing and I had a look around we realised that we were surrounded by teenagers. So it turned out that the festival was targeted for Indonesian youths, to raise awareness on sexual and reproductive health.

The screen was on the other side of the venue, so we had to turn backwards to see it. However, I sometimes took a peek to the stage to see Zeke preparing for his performance. The screening was followed by a short Q&A with the cast, so it was quite a while until we could see the spotlight back to the stage and Zeke Khaseli started to take action.

Zeke was clean shaven and wore neither masks nor costumes that evening. The regular planeteers were not wearing costumes either, with Ladya on bass, Aan on drums, Akbar on percussions (with a snare, a small cymbal, and a cowbell), Poppie on guitar, and Irma on violin and keyboards. Yudhi was absent, most probably because he was still pretty busy on being a new father.

Zeke seemed really happy with the festival, since it nicely combined music and films, plus it was held at a park in the heart of the city. He also seemed to be having fun with his performance, groovily dancing about to the avant-garde music. He also had a duet with his wife Ladya, singing acoustically with a small guitar which unfortunately had a loose jack so he had to keep fixing the connection every now and then.

He wrapped up his performance with his hit “Rolling Like A Stupid Stone” from his debut album “Salacca Zalacca”. Strangely enough I was so used to seeing Bin Harlan jumping about on the stage with his ’emir’ costume for this song that I kinda hoped that he would suddenly do that, suddenly running from the back of the crowd, along with Ralmond in the silver alien costume. 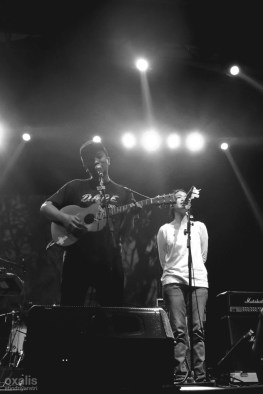 It was time for a movie screening again, but it was time for me to leave too. There were just too much cigarette smokes that I could handle (after all, my asthmatic symptoms had been pretty bad lately) so Titing and I decided to leave the venue.